Trivallis’ Hometown Hero campaign aims to unmask the hidden heroes living amongst us in RCT, who are doing good things for those in our communities. Each Thursday we share their story and say a big thank you to them for their hard work and support during these challenging times.

Gary Vowles from Hirwaun, who works part time as a plumber and as a minister, has been revealed as this weeks’ Hometown Hero for his work supporting those in need across RCT, especially in the Cynon valley.

We caught up with Gary to find out about his work to support people in his hometown and how it all started. 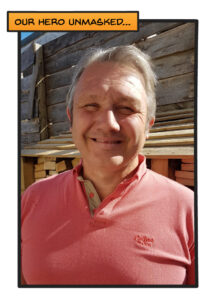 Gary said “I was born and bred in Treharris and moved to Hirwaun at the end of last year, after living away in England for 12 years. I became a part time Pastor at Ramoth Christian Centre in October 2019. The foodbank in the area was barely open so I decided to take it on and build it up to help people out.”

“As it grew, I began meeting more and more people and gaining their trust. It took off, and anything people asked me for support with I provided it where I possibly could. If I couldn’t help, I would tell them, because people respect you when you are direct.” He added.

Bethan Kendry, a member of the Trivallis Sustaining Tenancies and Empowering People (STEPS) team, nominated Gary as a Hometown Hero. She said “Gary has been a massive help to tenants and the wider community throughout the pandemic, especially those living in Hirwaun. He has been helping people on the phone who are at crisis point, making referrals for further support, providing emergency food parcels and liaising with councillors, Trivallis staff, local PCSO’s and community mental health teams on behalf of tenants and the wider community.”

“He has been a real hero for many and a real crutch to those in need at this time, offering any support in any way that he can. We are very grateful for the support that he has given and continues to give day in, day out.” She continued.

Gary has been providing support for people in his community since moving back to the area and even hosted a Christmas Dinner at his home last year, for people who may have otherwise spent the day alone.

Helping Gary continue to provide this level of support to anyone who asks for help is a wider team of community heroes. He works closely with Hirwaun and Penderyn Community Council and Hirwaun Matters volunteers, along with local shop owners, the Local Authority, Trivallis and local PCSO’s, just to name a few. He has also received a number of donations to support with the food bank.

Gary said: “I may be the face of it all but there’s additional support that goes on behind the scenes. It’s a real team effort! I just want to treat others as I would like to be treated. I love God and I love people. I can relate to the individuals that I help and I’m able to connect with them on their terms and help them when they are ready.”

We want to say a big thank you to Gary and his team for all the support they have provided to those living in RCT, especially the Trivallis tenants that they have helped.

Here’s a message from Bethan who nominated Gary for his hard work and support:

If you know a Hometown Hero that you would like to nominate, you can fill out a form here.
Visit our Hometown Hero Hall of Fame to see the other heroes in our communities, here.