Trivallis’ Hometown Heroes campaign aims to shine a light on those in communities across RCT who are going above and beyond to help others.

This week our Hometown Hero is nine-year-old Alfie Herbert from Tonyrefail. Alfie has been busy litter picking around his community, cleaning up the area because he cares for the environment and has raised over £1,500 for the NHS at the same time. 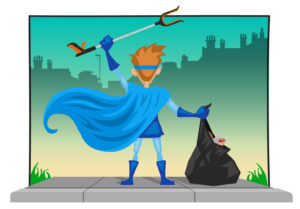 We caught up with Alfie’s mother, Karen White, who explained what Alfie has been up to…

“It all started at the beginning of lockdown; Alfie was helping his father in the garden with odd jobs to earn pocket money. He was aware that there was a litter problem, especially behind our home in the lanes and as he cares so much for the environment, he wanted to do something about it. He decided that through the money he earned helping his father, he was going to purchase a wheelbarrow to help with litter picking.”

“His grandmother came up with the idea that he could get sponsored and raise money whilst litter picking. Alfie decided to raise money for NHS Charities Together, I set up a donation page for him, shared it on Facebook and it took off. We weren’t expecting such a big reaction from family and friends, even strangers wanted to support.” Karen explained. 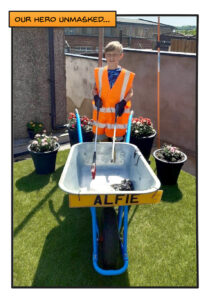 On the first litter pick that Alfie went out on, he collected 15 full bags of litter just from the lanes behind his home in Tonyrefail. Alfie was fully equipped for his litter picks, wearing a hi-vis jacket and gloves, so he was protected and using his wheelbarrow that he bought and litter pickers that were donated by his neighbours, for him to use. Alfie was regularly going out litter picking, and used the time allocated for daily exercise during the peak of lockdown. He still goes out and litter picks now, at least once a week or fortnight to keep making a difference.

Lee Mayes nominated Alfie to be a Hometown Hero after seeing how well he was doing on Facebook. Lee said: “I came across Alfie’s story on social media, I decided to donate and share his fundraising page, to help spread the word about what he was doing. It’s great to see the younger generation caring about their community and making a difference. Alfie has raised so much money for the NHS and deserves to be recognised as a hero in our village of Tonyrefail.”

Karen added: “We’re all so proud of Alfie, he just cares so much about the environment and his community, he wants to grow up in a place that is being cared for. It was quite disheartening to go back to places where he had litter picked, days after and it be covered in litter again. Hopefully by seeing Alfie litter picking, people will realise they need to use bins.”

As it stands, Alfie has raised £1,595 for NHS Charities Together and has had a huge amount of support from so many people wanting to help.

Karen said: “We had a gentleman reach out to us from Rhondda Tunnel Society who has made Alfie a member. He even sent him a certificate to show how much they appreciate what he has been doing with raising money and litter picking. He also has a pet hate for litter and has proposed the idea of working with Alfie to create a campaign against litter. It’s so lovely how people across RCT have reached out to show so much support.”

We would like to say a huge thank you to Alfie, for not only raising over £1,500 for the NHS but for also caring for the environment and his community. You are a real hero, Alfie!

If you have been inspired by Alfie and would like to clean up your area, you can find helpful information and safety advice around litter picking at Keep Wales Tidy.

If you know a Hometown Hero that you would like to nominate, you can fill out a form here.

Visit our Hometown Hero Hall of Fame to see the other heroes in our communities, here.